Childhood and youth in Gerlingen

Johannes Zimmermann is born on 2nd of March 1825 in Kirchstraße (Churchstreet) 5 in Gerlingen/Germany (see photo on the right). He is the oldest of five children of a farmer's family, who visits pietistical "devotional hours" several times a week. The grandfather of little Johannes has a restaurant, which is meeting place for the pietistical communities from Gerlingen and the neighbouring villages.Johannes Zimmermann lives in times of religious troubled times and an apocalyptic general mood. The pietistic milieu forms him, and already as a pupil he has the wish to become a missionary in Africa.

After school he starts an occupational training for baker's trade. After he has finished that, he walks by foot to Switzerland to start fulfilling his wish how to live ...

On 17th of August 1844 Johannes Zimmermann arrives in Basel and starts the six years long missionarie's training in Basler Mission.. He starts already to study the Gã language, because he feels a mission to become missionary at the Gold Coast in Africa.

On 09th of Dezember 1849 Johannes Zimmermann gets ordained by superintendent Kapf in Herrenberg. A week later he says goodbye to his hometown Gerlingen and sets off to his yourney as a missionary in West Africa.

Mr. Paul Steiner in his Zimmermann biography: "When Zimmermann stepped then into the pulpit of the old venerable church, then this whole house of God was filled with sitting and standing people. While he did his farewell speach he was often interrupted by sobbing of the parish, and when he spoke to the persons of his age and former mates, then even the tough, rough farm youth cried like children."

Johannes Zimmermann is 25 years of age when he arrives in the west african Christiansborg, a former danish colony, nowadays part of the capital Accra.The first place that he sees are the former slave forts - silent witness of inhumane times. Shocked at this first impression, Zimmermann spoke for the rest of his life against slavery and exploitation.

Some moths after his arrival in Africa Zimmermann falls ill with "Africa fever". He sees the only alternatives "soon death" or "prompt return trip home". He places himself into a black witchdoctor's hands who cures him in shortest time.

Zimmermann gets in totally with his new home country. He lives like an African with "his" Africans.

In 1851 Zimmermann gets married to the dissolved african women Katharina Mulgrave (see photo on the right). The Mission Society in Basel is shocked about that fact and also because Zimmermann haden't asked them for the explicit prescribed permission. 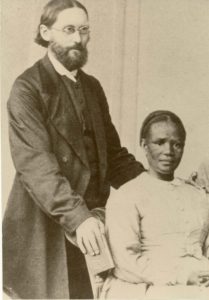 Slave traders had kidnapped Katharina when she was eight years old and brought her onto a slave ship from Africa to Jamaica. Near the coast the ship got in distress and sank. Katharina was rescued and then adopted by the english governor Mulgrave.

In 1842 Katharina got married to the African Thompson from the Liberia coast, who had been educated in Basel/Switzerland for a mission assistant. In 1843 the young couple emigrated to the Gold Coast. After six years the couple got divorced.

In 1854 Zimmermann moves his mission activities from Christansborg more to the interior, to Abokobi - a step from the european characterized lifestyle to  original african life. Here Zimmermann does intensive language studies and does translations.

In 1859 Johannes Zimmermann with the mission in Kroboland which forms his life fundamental and lays the foundations for his fame.

"Win the Blacks over the farmland." Johannes Zimmermann had colonizational ideas which were ahead of his time: utilization of mineral resources, progressive agriculture, increasing export of goods, to improve people's living conditions.

Zimmermann wants to solve the social problems of Germany: "... though immigration of the surplus, impecunious and for survival struggling people of the european cultural countries and through their colonization in the fallow lands of the virginal Africa. 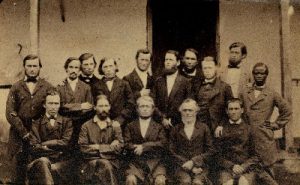 Johannes Zimmermann builds his mission in Odumase, the main village in the kingdom Manya-Krobo. Zimmermann feels as a "ambassador of Jesus". The tribal chieftain, king Odenku Azzu, is open-minded for the mission and he is "on the same wavelength" with Zimmermann.

As a sign of his friendship the Krobo king lets carve a chair from one piece of wood. The missionary can use this chair when visiting the tribal chieftain (1976 king Nene Azzu Mate Kole presents this "Zimmermann chair" as a gift to the town of Gerlingen).

The king places his son in Zimmermann's hands for upbringing and education. The son lives in the missionarie's family. "Teitschä" is now the honorary title of Zimmermann. The meaning of this word is  "father of the king's son Tei".

At the end of the year 1869, ten years after Zimmermann's arrival in Odumase, the christian parish is grown to 100 members. The mission house is open for everyone.Johannes Zimmermann works for 12 years in the kingdorm Manya-Krobo. He translates into Gã language the Bibel, 500 hymns (among them 300 own ones) and the catechism. He also wrote several poems. 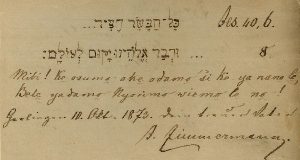 Missionary Bohner about a visit at Rebmann in Odumase, Kroboland: "He has put up his house ... into the middle of the black people's village ... The house is like a black's hut, covered with steppe grass. But the white coating from muschelkalk, the dark-brown shutters from solid wood of the african oak, the light glass windows and the galleries around the building tell someone who lives here."

When he is 51 years of age, Zimmermann is drained and exhausted from the big african adventure in service of the mission. For the last months of his life he stayes in Gerlingen/Germany.

On Gerlingen's graveyard he finds his last place of rest.

The glory of Johannes Zimmermann didn't fade in Kroboland. He is held in great esteem in Ghana, is still honoured. His forged links are like a "bridge between people and cultures", on strong foundations and still busy used.

The presentation of Mr. Stutzmann offers a very interesting and diverting summary of the eventful life (Download pdf, 91 KB).

"Bridge between people and cultures"

Johannes Zimmermann's operational area, the kingdom Manya-Krobo, forms together with the kingdom Yilo-Krobo the Kroboland. It's located southeastern in the since 1957 independent state of Ghana, is about 750 square kilometers large and has approx. 250.000 inhabitants.What started with Zimmermann has been continued: There are forged links between Kroboland and Gerlingen, and they are indestructible. In the meantime there were delegations from Kroboland in Gerlingen and people from Gerlingen in Kroboland ...

1970 the ghanaian presbyterian church leader Albert L. Kwansa visited Gerlingen to search for information about background, youth and surrounding of the missionary Johannes Zimmermann, who in nowadays Ghana very much honoured in the oral tradition of Kroboland's history .

1972 mayor Wilhelm Eberhard travells in an oficially delegation to Zimmermann's sphere of activity in Africa.

1976 the king from Manya Krobo, Nene Azzu Mate Kole (see photo on the right) comes to Gerlingen. He is one of the well-known tribal chieftains of Ghana. Together with inhabitants of Gerlingen he unveils the commemorative plaque for Zimmermann (see below) in front of Petruskirche (St. Peter's church).

Information about the memorial stone you can find here..

1989 king Nene Azzu Mate Kola invites Gerlingen's mayor Sellner together with a delegation to his 50th throne anniversary to Ghana.

Wilhelm Eberhard (†), mayor in retirement: "It's unbelievable how people in Ghana talk nowadays still full of respect and gratitude about  Johannes Zimmermann and his beneficial life's work. Who ever we met - not only the members of the hosting church, also political personalities - pay tribute to the good deeds which Zimmermann did from 1850 to 1876 and which are still to see. Seen from the angle that he had to deal with the conceivable most difficult conditions it's all the more admirable."

Traces of the missionary

We found the following "traces" of Johannes Zimmermann

The Johannes Zimmermann street in Gerlingen:

The Johannes Zimmermann memorial church was erected in Odumase (Ghana):

The well in Odumase (Ghana) that Johannes Zimmermann had built is still in use:

The commemorative plaque at the church in Gerlingen (Ev. Petruskirche Gerlingen) was erected 1976 for Johannes Zimmermann.

Information about the Zimmermann memorial stone.