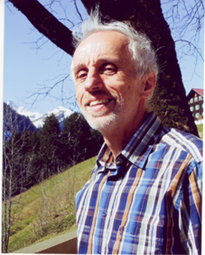 He studied in Tubingen and Zurich Theology, married Brigitte. They have two children - Verena and Manuel.

On December 17, 1984, Eckhart Hauff received a call from the parish "Brüdergemeinde" in Bad Boll: "Departure on January 12, language course in Nairobi starts on January 14, then end of April trip to Mbeya in Tansania".

Family Hauff manged with placidity and constructive planning to emigrate to Africa by plane two weeks after the phone call.

The Hauffs arrive in Kenya and complete first of all a course in Kiswahili language. Kenya is not new for them - 9 years before they had worked for some weeks near Mombassa, together with some students from Germany.

In April, the Hauffs travel from Kenya to their mission area, Mbeya in Tansania. Until 1989, Eckhart and Brigitte Hauff work there for the theological college of the parish "Herrnhuter Brüdergemeinde".

It turned out to be a challenge to connect teaching contents and -methods or exam requirements with the general living conditions in this country where getting the daily food is a problem. In this country where "Christians" had taken a piece of culture from the natives by banishing old African signs and symbols as "witchdoctor art". Eckhart Hauff teaches pastors-to be to see traditonal symbols as sign of hope and visible reality of the not reached reality.

In 1989, the Hauffs come back to Germany. Eckhart Hauff writes down his thoughts concerning globalization in two poems, written at Pentecost (available in German only).

Until his retirement Eckhart Hauff was pastor in Dornstadt, but still lives "here and there":

"Our focus lies in constant meetings, in living together there and here, in discussions about things wich are relevant for both sides." In our working team of approx. 30 people it's all about these meetings: "Face-to-face encounters - on a par with each other". Since 1981, Eckhart Hauff is involved in friendship- and partnership-networking between some parishes of the deanery Ulm and the parish (Herrnhuter Brüdergemeine/Moravian Church), Tukuyu in the southern highlands of Tansania. A flyer explains the history of this partnership - in German and Suaheli. "It is important for us that people from different cultures which belong to the same denomination can meet. We experience all economic and cultural differences of live conditions. We communicate in English, Suaheli, without words and with music. So we learn from each other, celebrate church services, are together out and about, meet in our houses and groups."