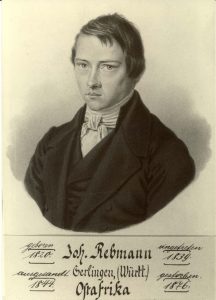 Johannes Rebmann is born on the 16th of January 1820 as third from eight children of Mrs Anna Margarete Rebmann, née. Maisch, into an old Gerlingen family. His father is farmer and winegrower. The house where Johannes Rebmanns is born is near the church - Kirchstrasse (Churchstreet) 18 in Gerlingen, Germany.

Gerlingen village has at that time about 1.500 inhabitants. In village life people discuss daily topics but also politics and faith. Also the awakening movement is opinion-forming in Gerlingen: The Pietism gets new strength because of the public resistance against enlightenment, trust in progress and ossify church hierarchy. Mission as task of the Christian world gets an important role and must have impressed little Johannes Rebmann also.

It points out his religious convince already in childhood times that he was called in Gerlingen's elementary school "reverend". He wants to become a missionary, go to unknown foreign countries as a "preacher and canvasser of the gospel".

1839 the 19 years old farmer and winegrower Johannes Rebmann is admitted into the Basler Mission.

Five years later he moves to the Church Missionary Society in Islington, England.

After finnishing his occupational training the bishop of London ordains him on the 26th of October 1845. And in February 1846 he goes on board of the sailingship "Arrow", to reach after months of travelling his new operational area, as a missionary in East Africa.

Johannes Rebmann is a busy letter writer, always interested in news from his home town: "You must not think that that, what seems negligible and not important for you in Gerlingen, is it for me in Africa, too. Specially the far distance gives news of negligible kind an importance."

"I have a duty in East Africa that will not allow me to visit my dear town where I was born, not now and, as far as I can see, also not in the next years."

On the 10th of June 1846 Johannes Rebmann arrives in Mombasa, nowadays in Kenya ...

He workes with Dr. Johann Ludwig Krapf from Derendingen near Tübingen/Germany, who settled down on the small island Mombasa when he had got expeld from Abessinia after fruitless mission attempts. Krapf wants to put up a resistance against the Islam that comes down in Africa to the south: diagonally through the unknown Africa - from Mombasa in the east to Gabun in the west - missionary outposts shall be built - in intervals of 100 travel hours. The realization of this plan seems to be nearer after Rebmann's arrival.

After difficult negotiations with tribal chiefs and multifarious difficulties both missionaries can open the first mission - at the tribe of the heathen Vanika in Rabai Mpia, approx. 25 kms from Mombasa. Rebmann and Krapf built - mostly with their own hands - a hut in that Kaya, that means in that fenced in village in which the normally with their aminals living occupants take shelter at a risk.

Half an hour from Rabai, in Kisilutini, another mission is opened. That one becomes the center of the work. Rebmann goes from hut to hut to talk to the people. In time Rebmann expands his radius of action into the unknown. He himself shows you his operational area.

"Hardly ever a mission will have been started in such a weakness (malaria), ... but that's how it should be, that we do not praise our own power ...".

"On 11th of  May, in the middle of a large desert which is full of wild animals, like by name rhinos, buffalos and elephants, we slept under prickly hedges, safe and calm under God's gracious custody."

Johannes Rebmann draws a map of the Kikuyu area in the year 1848. Kikuyu area is the area in Kenya in which the language Kikuju is spoken - from people of the tribes Kikuju, Wanika, Dschagga. 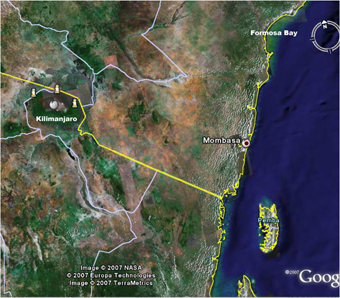 Information in English with maps see also on the websites of "Arusha School Alumni, Tanzania".

The missionary Rebmann became in the until then unknown area lso a researcher and explorer.

Johannes Rebmann makes thrusts into the unknown, into a world that no European had seen before. His faith gives him stability. He writes down his wish to God in the foreign world on page 1 of his diary, which he keeps from 1848 on: "Restore to me joy of your salvation and grant me a willing spirit, to sustain me." (psalm 51, 12):

The words in this diary are impressive records of his experiences ... His most famous discovery: On the 11th of May 1848 Rebmann sees as the first European the about 6.000 meters high snow covered Kilimanjaro. (Link to the original pages of his diary with typewritten translation)

While many specialists laugh at his report about a snow mountain in the middle of hot Africa, the "Société de Geographie de Paris" realizes the facts, and Rebmann is presented with a medal in 1852. Read his Report, that he writes home after that.

Rebmann set to intensive language studies with a vengeance. He works on dictionaries in Kinika and Kisuaheli, writes the "Dictionary of the Kinyassa Language", learns Arabian and is making a translation of Luke's gospel in Kinika.

Rebmann is active for 29 years in far away East Africa - without a holiday day or a visit at home in Germany. Missionary Price who came 1875 to him persuades him to travel to Germany, where Rebmann stays for his last year in life - in the home country.

"We came to Africa without a thought or wish to make geographical discoveries. Our big target was the extension of God's kingdom.".

"This morning we saw the mountains of Dschagga clearer and clearer, until I thought at about 10 am that I see on the top of one of them a noticeable white clowd. While he answered, this would be a clowd, but he wouldn't know what the white is - he assumed it would be cold - I got obvious and sure that it can't be anything else than snow, for which the people have no name, because it never falls in this region."

In September 1875 the nearly blind Johannes Rebmann comes back to his home country. He gets guided and supported by his devoted servant Isaak Niondo, who was with his father one of the first Vanika who were baptized by Rebmann.

In Korntal, where his earlier mate Dr. Krapf settled down, Johannes Rebmann found his last residence. On Dr. Krapf's advice he gets married with  the widow of the India missionary Finkh in spring 1876.

In age of 56 years Johannes Rebmann dies on 4th of Oktober 1876 from a pneumonia. On the old graveyard in Korntal, Germany, he finds hist last place of rest, "saved in the arms of Jesus".

Stimulated by Krapf and Rebmann the bavarian reverend Ittameier founded an "Evangelisch-lutherische Mission für Ostafrika in Bayern" (= "Protestant-lutheran mission for East Africa in Bavaria"), which later got assimilated in the Leipziger Mission. The missionary work in East Africa was picked up also in Neunkirchen, Berlin and Bethel (Bodelschwingh).

Rebmann had paved the way in Dschaggaland for others who came later and marched in his footstepps to continue what he had started.

"I am not here to make geographical discoveries, but to uncover the release and the salvation in Jesus Christ for the people who sit in darkness and the shade of death."

Traces of the missionary 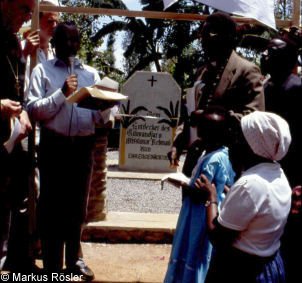 Not far from Rebmann Memorial Library is the in 1933 erected memorial stone which was renovated on the occasion of the library opening in 1993. 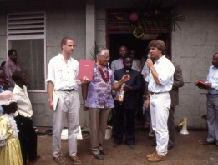 In October 1993 the "Johannes Rebmann Memorial Library" in Kalali, Tanzania was opened on the occasion of the 100 years anniversary celebration of Leipziger Mission.

Above all the library shall be of benefit to the children of the families who have no electrical light at home and who have no money for a proper education.  For the library's opening ceremony came thousands of locals and a number of guests of honor - among them the Secretary General of the Lutheran World Association, the Norwegian Gunnar Staalsett, and bishops from three continents. 'Representatives of the Evangelical Lutheran Church in Tanzania attended also.

The Rebmann glacier on the Kilimanjaro

The Rebmann glacier on the Kilimanjaro in December 2000. It can be found next to the Machame-Route. Caused by the climate change it will disappear between 2015 anc 2020.

1944 the English erected a large memorial cross in Mombasa, Kenya.
The commemorative plaque in english and suaheli reminds of the both swabian missionaries  Krapf and Rebmann. Next to the cross there are four graves. One of it is the grave of  Johannes Rebmann's wife Emma, another one probably the grave of this only child who died a few days after birth.

1961 the Krapf-Rebmann memorial church was opened in Kilifi, Kenya. 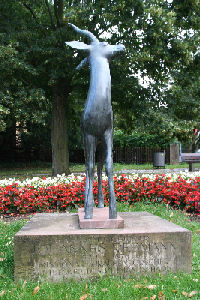 The bronze memorial statue  for Johannes Rebmann was placed 1957 in Gerlingen. The Gerlingen freeman andsculptor Fritz von Graevenitz has created a gazelle as a symbol of Africa.

Streets and ways that were named after Johannes Rebmann in Germany:  Freiberg/Neckar, Gerlingen, Korntal, Lubeck, Stuttgart.