Reinhard Rathlef on the ferry across the river ...

When Reinhard Rathlef traveled in 1965 for the Deutsche Indianer Pionier Mission (DPIM) by ship to Brazil, he had been prepared for his mission in courses, lectures and work experiences. But he couldn't imagine what he had to expect in the deepest jungle of Brazil.

On one side of the river civilization, on the other side, at the borderland Brazil-Paraguay, jungle. Here the Brazil law isn't in force, but there are own "laws". Reinhard Rathlef has no command of Portugese when he arrives on a small Indian Mission in Brazil in the deep Mato Grosso jungle, 1,400 km from São Paulo.  Besides the language the earlier druggist learns how to pull out teeth, give injections, lance furuncles, build jungle huts etc.

In 1965 Winfried Rathlef, missionary of Deutsche Indianer Pionier Mission (DPIM), founds the first mission station in Pirajuí, but has to retire from there after a while because of health problems.Two years later his brother Reinhard and Mr. Gerhard Kern continue the work that he had started. Key aspects of the holistic mission work are besides parish establishment medical work, the building up of agriculture and the education of the Indians. The Guaraní tribe in Pirajuí is oppressed by the "civilized borderland inhabitants": smugglers and other criminals use them; weapons, crime and alcohol are the law and rule life.

Illness kills large amounts of people. There are no streets, no hospitals. The hospital which is hundreds of kilometers away doesn't want to medicate Indians.The military tries to establish order but fights vainly in that jungle  ... Indian Chief Juleao invites the missionaries and asks for help. 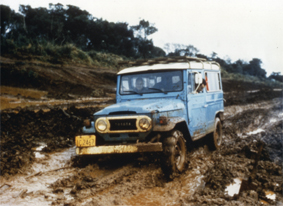 "Such a mission brings you to your physical and mental limits." - Good, that Reinhard Rathlef and the nurse Hilde Tiede had met in the headquarter of the mission in São Paulo. In 1968 they marry at the Indians place. Mr. Gerhard Kern starts a new work, 700 km away.

Hilde Rathlef is reading to Indian women and children.

God gives the Rathlefs strength for their work and they complement one another so good as a missionary couple, that they get a lot done in their adventurous surroundings. "It's a miracle that we survive; all around us illnesses, violence ..."

The "school" finds lively interest. Mothers with babies on the arm, menfolk who have a way with bush knives but never have had a piece of paper in their hands, children in all ages ... they want to be able to read and write. Besides the spelling book the New Testament, translated in Guaraní language, is the reading book.

The power of God's words changes many of these people. The missionaries can witness how excessive drinkers give up drinking through personnel faith and through prayer.
The Indians drink only high proof sugarcane schnapps. The fear of ghosts goes away. New hope arises; they develop singing and music making in church services.

The Rathlefs provide confidence with their dedicated mission and their Christian way of life. They give help for self-help to give Indians and criminals a chance to become responsible community members. Because of the nomadic Indians these facts get around quickly. From 1965 to 1975 reams of people come with all their belongings from everywhere to the small hospital of the Rathlefs who live amongst the Indians. Day and night you can hear "hand clapping", the way how Indians announce their arrival. Worm therapy, wound treating, but also information about personal hygiene and hygiene in general are in these years everydays life for the missionaries; as well as the fight against the prejudice that illnesses are conjured up by bad persons who have to get convicted for that and to get killed.

In the first years the Rathlefs are busy alone in Pirajuí - amongst Indians and amongst smugglers and criminals, who call themselves "Civilizeds". To protect the Indians and to get better living conditions for the boarder region it has to be helped everyone - also the criminals. Vaccination campaigns, church services, holistic instructions ... For a catchment area of 120 km ..."The first years are back-breaking. Loneliness and fight for survival are the hardest challenge of our lives. Ill ourselves, the climate gives us a hard time, contaminated water, missing food, swarms of insects. We are absolutely exhausted when finally help in additional resource comes. 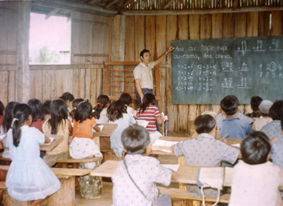 Reinhard Rathlef at the beginning of the 1970th in the Indian school Pirajuí. The Rathlefs are proud that some of these children did better at school than they did themselves.

After about 15 years they had managed it: epidemics declined. The Indians' and the "Civilizeds" general state of health has ameliorated. In absence of the missionaries there is always someone available who has learned to give first-aid in simple diseases.

The new founded school in which the Indians get prepared for the Brazilian school, is subrogated in 1976 to the state school system.

Reinhard Rathlef - in all circumstances "close to people"

Nowadays there are approximately 70 of the alumna from different mission schools in the vicinity teachers themselves, and the percentage of students from Pirajuí is high. In all of these schools the headmasters are Indians. But in Pirajuí there are not only teachers - also nurses, skilled farmers, missionaries, pastors. A young man graduated two years ago from university and passed his exam in biology. He is writing books and works as a teacher.
The health and hospital care is no longer in the hands of the mission since a short time. The work is done by indigenous village health helpers and nursing workers with help of the governmental health department.

Radical changes like television in the Indian village, towns reachable nearby the reservation with shopping facilities and secondary schools, loam- and gravel paths with bus connections unsettle the life of the former hunter-gatherer. Missionaries accompany this people lovingly with a lot of patience and time.

Reinhard Rathlef went officially into "retirement" in 2002 but you can't really call him "retired" ...

Reinhard and Hilde Rathlef live since 1991 in Germany again, in Korntal. But their hearts - and also the hearts of their children stayed with the Indians.

The family stays in contact with their South American friends in the Indian communities and with the "Wild West Community". When they come for a visit to Brazil, then alumna pupils come joyfully from 3,000 km distance. The Rathlefs continue supporting the missionarie's work in word and deed.

"Many thanks to everyone, also to the people from Gerlingen who have accompanied us for decades with active encouragement and support."

"Civilization is steamrolling the Indians in Brazil's jungle. Everything has changed but didn't turn for the better."

"Other criminals gravitate to smugglers. All kinds of criminals concentrated in the borderland. 'Not without weapons into that area,' said the military. But we trusted in God and that he will prevent us."

"Our motto from the very first was: win, train, send people. That has stand the test of time."

"When we live the Bible and not only preach, then we confirm the Gospel."

"The Indians must learn Portuguese so that they do not go under in Brazil. But the preservation of their own culture - and also of their language  - is vehement important and has to be teached at schools!"

"We acted with all available resources and powers, when innocent women should be clubbed to death. With success. In the nearly 30 years of our stay in Pirajuí there were still trials, but no women any more was tortured to death.
Where the cycle of murder and revenge gets broken, new life arises from the faith in Jesus Christ. We experienced that quite plainly.

Example:
Avelhano hurts deliberately a Christian's pig. The Christian doesn't take revenge on him but after the mother pig is healthy again and has farrowed he gives Avelhano a young pig as a gift  ... -
At a later date Avelhano became Christian, after he had kept an eye on the people of the parish."

"We rescued the life of many Indians. The annunciation of the Bible's message changed the life of Indians and criminals who live nowadays a responsible life. For many of them the Bible verse John 3, verse 16 became a song of hope":

(English:)
For God so loved the world that he gave his one and only Son, that whoever believes in him shall not perish but have eternal life."

"Nowadays there are people in three provinces of that huge country to the country of Paraguay who pass on what we together had experienced and lived."