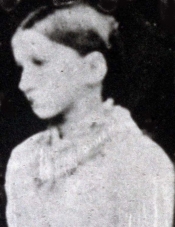 No other family from Gerlingen gave more sons and daughters to the mission than the Däuble family. Father Jakob Däuble was born in Hasslach near Herrenberg and came in 1841 with eleven children as a school teacher to Gerlingen. Three of his sons became missionaries, two daughters missionary's wifes.

Luise Friederike Däuble is born in 1835 as youngest daughter of Jakob Däuble and his wife Luise in Sindelfingen/Germany. The Däuble family moves in 1841 to Gerlingen.

Luise Friederike Däuble gets espoused to the young missionary Kammerer in India, but before she arrives India he had died.

Luise Friederike Däuble works in the orphanage in Mangalore and as a teacher in the Cathechism School. There she becomes acquainted with a young theologian from Württemberg/Germany - August Finkh, born 1831 in Calw. August Finkh is released  from the Württemberg consortium for six years for mission work and writes to the Basel Mission:

"... this time I have to present you two private requests. The first is the admission for marriage. The second request is a closer definition of the first. I request to allow me to ask for the hand of maid Luise Däuble, teacher at the local girls school. I got friendly with Miss Däuble for a while, namely in April this year, but I didn't tell her any word that would commit me. And when I was advised from the side of my brothers of our conduct which attracts attention and causes tongues to wag, I changed that and since then I am keeping my head down against her. But it will be allowed, when once my parent's opinion will have got to me and this will be positive, to tell her about it and official propose marriage to her, of course on condition of the still to expect authorization of the adored committee without which a real engagement is out of the question ..."

August Finkh and Luise Friederike Däuble marry. In 1865 they travel with their daugter Selma to Europe. Finkh doesn't feel well on the 14 day cruise from Mangalore to Suez. On the continuation of their journey with the train to Alexandria his state of health gets worse. August Finkh dies on the ship near Korfu on the 17th of February. Luise Friederike Däuble reports to Basel: "Because we were so close to the land, it wasn't allowed to discharge the dead body into the sea. They told me that the body can be brought to ashore in Korfu." After a long aberration in Korfu Luise Friederike Däuble finds the German consul who promises her to collect the dead body from the ship and bury it Christian on the land. She herself can't attend the burial because the ship doesn't wait. Luise Friederike Däuble is pregnant in this time. Back in Heslach/Germany she gives birth to a child who dies soon after birth.

More information about Luise Friederike Däubles life from 1865 to 1876 can be found in some letters which are kept on the city archive of Gerlingen: 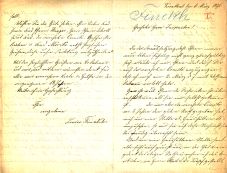