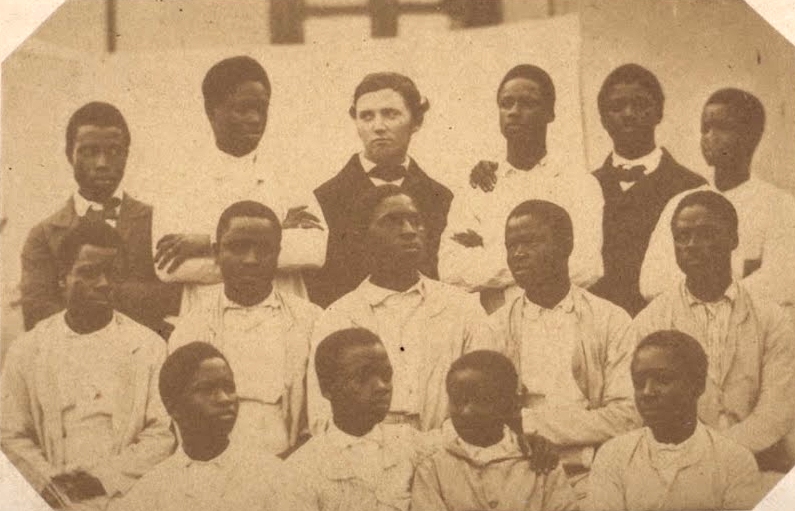 Christoph Zimmermann is born in 1838 in Gerlingen/Germany as "little brother" of the well-known Johannes Zimmermann.

From his stepfather he learns the trade of a baker. 1854 he passes the state examination, 1856 he is accepted for the teacher seminar in Esslingen.

Christoph Zimmermann was 12 years old when his brother Johannes went to the Gold Coast. At that time already he dreamed about following suit and becoming also a missionary or a teacher. The pecuniary circumstances hadn't allowed to give him good education in Korntal. His mother had died in 1841, his father - who had got married again - 1846 at the typhoid fever epidemic in Gerlingen.

Christoph Zimmermann cancels his training in the teacher seminar when his brother Johannes asks him to come to Africa for educating his children and teaching them the German language. Together with the missionary Jakob Heck from Gerlingen he travels to the Gold Coast.

In 1856, on the 27th of December, Christoph Zimmermann arrives in Akropong at this brother Johannes' place. Christoph finds his disease-ridden older brother nearly out of all recognition.

He starts after some weeks to teach his brothers children and helps him with expositions. He learns the Gã-language which is spoken in his brothers family. Soon the climate makes him troubles. Typhoid affects him and he has painful abscesses, so that his brother Johannes fears for Christoph's life.

The Mission House in Basel takes over Christoph Zimmermann and ordains him in 1864 in Akropong, where he already in 1862 had overtaken the boys school. Every month he does sermon journeys with his students, teaches them handicraft (they have to sew their clothes themselves) and keeps them busy with farm work. Besides instructions he gives Sunday and Evening Classes which are visited by more than a dozen of young men. He teaches arithmetic, writing, reading, biblical history and geography.

The Mission House gives him Maria Pfuderer from Hattenhofen for his wife. 1867 the first daughter is born, but she dies soon.

1867 Christoph Zimmermann changes to Abokobi. There his health gets better but "nevertheless I feel that my strength becomes more and more weak". He asks for a holiday in Europe. In May 1868 he arrives in Liverpool. He recovers in his homeland, but he doesn't go back to the Gold Coast. He travels to America where he overtakes from 1870 on rectorates in Ann Arbor, Michigan, and in Port Huron.

On the 10th of May in 1890 Christoph Zimmermann dies in America.