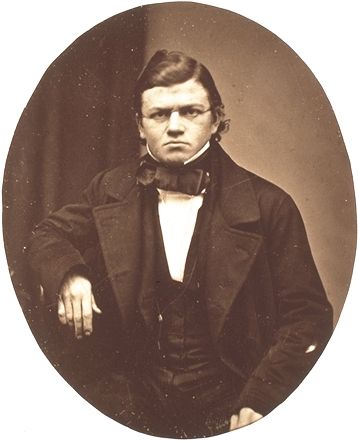 No other family from Gerlingen gave more sons and daughters to the mission than the Däuble family. Father Jakob Däuble was born in Hasslach near Herrenberg and came in 1841 with eleven children as a school teacher to Gerlingen.Three of his sons became missionaries, two daughters missionarie's wifes.

Karl Gustav Däuble is born in 1832 in Sindelfingen as the youngest son of Jakob Däuble and his wife Luise. The Däuble family moves to Gerlingen in 1841.

Karl Gustav Däuble is schoolmate of the later missionary Jakob Heck. Karl Gustav Däuble reports from Basel about his teens in Gerlingen: "I became an apprentice to master joiner Höschele in Gerlingen, where I learned for three years. My trade cornered me often, because I hated when something didn't go well and when I missed the courage and the energy (not the ability), but the diligence to everything I had started was missing. In the last year of my apprenticeship nothing that I took into my own hands worked out and I felt how the Lord wanted to show me my incapableness and debility, when I didn't do my work in his power and under his mercy. Previous spring my brother Wilhelm wrote to me I may come here, to Basel."

Karl Gustav Däuble gets registered in the Mission House in Basel, ends his studies in 1855 and gets on duty for the English mission CMS. In 1856 the Bishop of London ordains him in St. Pauls Cathedral, the Bishop in Calcutta also. His journey goes to Benares in North Inida. In 1862 he gets relocated to Agra and assumes there an orphanage. After 33 years stay in India he gets home leave in 1870. After his return he gets relocated to Lucknow. There his wife Marie, née. Elsäßer, who he had married in 1857, dies in 1877.

In 1893 Karl Gustav Däuble dies in Kangra, Punjab. His second wife Marie, née Stoephasius, who is in duty for the Berlin Women Association, continues the work in Punjab Mission after his death.