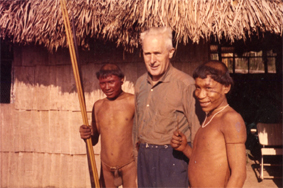 1961, James Rathlef with "his Indians" at Amazon

"We need an initiative from Germany which does its utmost for the welfare of these oppressed indigenous people of South America."

James Rathlef, visionary and pioneer, has an eventful life:
As son of a German-Baltic pastor family he is born on the 22nd of May in 1896. (There it's usual to name the children with English first names.)

In 1918 he moves to Germany. He has to give up his Engineer Study because of missing financial support. He is busy with children and young persons for the YMCA Saxony, Parish helper exam in Carlsdorf/Ostpreussen. He marries  Elisabeth, née Hahl who descends also from a pastor family in Estonia. Her grandfather had moved to Estonia to run there an orphanage.

The year 1936 is significant: James Rathlef gets appointed to an Evangelist and preacher by the Wichernvereinigung (Raues Haus in Hamburg). His duty brings him to many parishes and churches all over Germany. 1951 he starts a totally new kind of evangelization in a tent hall: He founds together with friends the Zeltmissionsvereinigung Süd e. V. (To this day this tent is in use in many parishes.)

1961 James Rathlef is co-founder of the Vereinigte Deutsche Missionshilfe (VDM). (The VDM is nowadays one of the biggest evangelical missions in Germany. Worldwide it's missionaries are on duty, often connected with domestic partner missions.) For many years Gerlingen was the domicile of this mission.

For James Rathlef the resolution was fixed: "We need an initiative from Germany which does its upmost for the welfare of these oppressed indigenous people of South America." The primary focus shall be on the annunciation of the Bible's good news, the establishment of parishes and not least medical aid. James Rathlef gets a lot of support from his circle of friends with who he is in intensive contact. His friends are optimally informed by his newsletters and his mission newspaper "Werdet meine Zeugen" ("Become my Witnesses"). In the many years of his evangelization activities in Germany reams of adults and children had found the faith to Jesus Christ. Many of them like to support the new project. Some friends offer their help to do something themselves.

1961, that's in the age of 65, James Rathlef goes on the plane to South America. Jungle live. What will sway a man in a age in which others retire, to expand for half a year into the deepest jungle South America's? To run the gauntlet to be hunt by man-eaters, to accept killing tropical diseases and stresses and strains without end. Long jungle marshes, set up camp in the wilderness, swarms of mosquitos and bloodsuckers at day and night, danger with poisonous snakes, scorpions and ... and ... and ...

From Bolivia's highlands with more than 4,000 meters height down to the Amazon marshes, then into the cactus desert of Chaco in Paraguay with 48 degrees Celsius in the shade ... He wants to bring the message of Jesus Christus and his rescue to the natives. A message full of hope. Against the fear. He doesn't want to hear jokes about the situation of the indigenous population. Long ago he has taken the misery of these people into his heart. He loves people.

What Rathlef experiences on his excursion through South America lies like a heavy burden on him. Example: 900 members of a trial die in one fell swoop in the consequence of measles. There is no one who gives aid. No one who tells them about the love of God. Rathlef is on the trace of farmers, gold diggers, rubber seekers, tradesmen who unscrupulous rip off tribe members. High proof sugarcane schnapps is used to make the jungle people compliant. Whole tribes extinct. Tribe war and the brutal rites are just as bad. Should these people not be included when Jesus says in Matthew 28, verse 19: "Therefore go and make disciples of all nations, baptising them in the name of the Father and the Son and of the Holy Spirit"?

Already eight months after his return from South America the  Deutsche Indianer Pionier Mission (DPIM) is founded on the 27th of December in 1962. Link to the Corporate Charter which was signed in the small study of James Rathlef in Gerlingen-Gehenbühl,  Ganswiesenweg 37.

At the start there are 23,000 DM and a missionary. This missionary is Winfried, James Rathlef's oldest son, already busy in Brazil. Lateron many other missionaries will come. 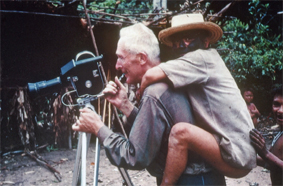 The work of DIPM expands from Brazil to Paraguay. Nearly for ten years - up to the age of 75 - James Rathlef leads the whole mission. That includes among other things to travel often to South America. Rathlef spares no pains to penetrate to the places where the new missionaries act and to encourage them. He sets sail to places in the jungle where no ways exist, no medical aid, no radio, no telephone, no shop, no law. Only the brutal law of the forest exists. In the age of 75 he expands with his successor into the jungle of Paraguay, on the search for new areas of activity. The tribal chiefs ask for help through missionaries. Who can close the eyes in the face of the pain of these tormented and moribund people ... (Nowadays there are more than 60 missionaries busy in the tribes, additional a amount of short-term assistants.) James Rathlef's heart beats for people. He trusts them a lot. The Indians feel that, but also the visitors in his courses of lectures. He makes it easy for the poeple to entrust themselves to the strong God and to take forgiveness of blame. Reams of people ask James Rathlef for help and are glad to take his advices.

The Rathlef's six children carry mission's concerns in their hearts:
Maria and Brigitte from Germany, Winfried and Reinhard went to Brazil, Renate to Japan and Angela to Italy. Together with their marriage partners. This fire of mission jumped over to the grandchilds, too. Some are already busy overseas in mission. Therefore the grandparents prayed many years. It was their big wish.

In high age the couple James and Elisabeth Rathlef find a nice conclusion of their missionary activities: Nearly for two years they can stay with their son Winfried and his family in in Campo Grande/Brazil, door to door with town Indians.

James Rathlef dies on the 1st of November in 1988. Three days before his companion Hellmut Lang could visit him in his flat and say goodbye. Already bedridden James Rathleff could appreciate this visit. Elisabeth, his wife, cared for the 92 years old James up to his last hour. Around one year later, on the 1st of February 1990, Elisabeth followed her husband, also after only short time of disease. Both died in pleasant anticipation to heaven. They are entombed in Kaufbeuren where two of their daughters live.

James Rathlef writes in his book "Ich gedenke der Taten des Herrn - mit Jesus in drei Erdteilen" ("I commemorate the Lord's Doings - with Jesus in three Continents")
- Book in German, out of print:

"... On the 17th of October 1961 I boarded in Frankfurt/Main/ Germany the Boeing 707 ... For the next six months the following stations were planned: Peru, Bolivia, Paraguay, Brazil and Venezuela ... The access to the tribes and different settlements was possible almost  exclusively by boat or by waterplane. So I started in this months 68 times by plane ..."

Reverend  Hellmut Lang, chairman of DIPM for many years, is full of expectation and says to James Rathlef: "When the first chief gets baptized, we come over and celebrate with you!"
It is clear in everyone's mind, that here God himself has to interfere. What can missionaries bring about? The desperately state of emergency is too great for the people! But when God is able, to work wonders here in Germany and to give new life to the people - why shouldn't he do it in South America as well?