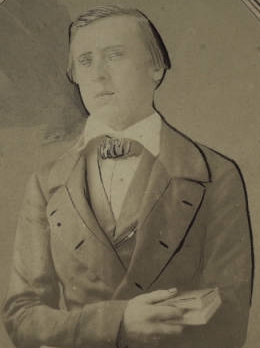 Jakob Heck is born in Gerlingen on the 4th of May in 1832 as son of the blacksmith Johann Heck and his wife Katharina, née Kruck, as oldest of six siblings (link to family tree). After his father's death his mother gets married to the baker Elias Schmid. Jakob Heck learns the trade of a baker, but "without having affinity for it". An epidemic illness - probably typhus - puts Jakob Heck for 12 weeks in sickbed. He is unconscious for a longer time; his family members wait for 14 days for his death. When he survives it's for him "in the inner clear that the Lord has kept me for something special".

The sermons of Wilhelm Hofacker and first of all the goodbye sermon of Johannes Zimmermann in Gerlingen's church Petruskirche strengthen his for a long time privately kept desire to become a missionary. In 1850 a visit on the mission festival in Basel gives the last impulse to join the Basel Mission House in August 1851. After a 5 year education Jakob Heck is sent to the Gold Coast on the 11th of September in 1856.

Jakob Heck travels ogether with Christoph Zimmermann via Strasbourg, Paris and Le Havre to London to take a ship from there. An autumn storm throws the ship "Ida" near the english coast onto a cliff where it bursts. Heck and Zimmermann get rescued and go back to London. After the second start the trip works out.

Jakob Heck finds his first work place in Christiansborg, afterwards he gets transferred to Abokobi in the Aquapem mountains. He learns the Gã language, later on also Adagme. When personnel changes happen in Odumase at Johannes Zimmermann's mission, Heck asks to get sent there.

Besides his sermon journeys and the community work Jakob Heck helps Johannes Zimmermann in Odumase with his translation- and collecting works.

On the 14th of August in 1860 Jakob Heck marries in Christiansborg Mina Rueff from Winnenden. His marriage is only short - in 1862 his wife and his both children die. In 1865 he marries his first wife-s sister, Catharina Louise. A year later - on the 11th of May in 1866 - Jakob Heck dies from a heart spasm and gets buried in Christiansborg. His widow goes back to Württemberg where she dies high aged in 1928.

A delegation from Gerlingen traveled in autumn 1989 to Odumase - for the 50th Throne Jubilee of King Nene Azzu Mate Kole from Kroboland/Ghana. The delegation visited the three Heck-Graves from 1862 which are still there.

"Brother Zimmermann received from me on the 16th of September the fair copy of the new Gã hymnbook for the print, and I offered to help him with his work in the community. The Gã brothers wish very much that the hymnbook will get soon printed into their hands, all the more because the old one is soon exhausted and very poor."This hard work costs Heck a lot of time, energy and sleepless night hours "and many a sigh of me raise up to the Lord."

Jakob Heck describes for the Basel Mission on the 29th of July in 1862 the living conditions at the Gold Coast:

"... After a nearly 2 months lasting tooth illness died our beloved first-born, Catharina Friedericke, on the 20th of June, and my blessedly wife suffered at that time already from a crampy diarrhoea, which immediately developed to a dysenterie. I myself had to stay in May for 10 days in bed. On the 30th of June my dear wife gave as a result of her suffering 4 weeks to early birth to a baby girl and died because of her medical condition on the 4th of July.
On the 6th Brother Zimmermann christened my second child Johanna Maria, who the Lord called home again on the 14th of July. I have now three graves in Odumase, in which the remains of my dearests on earth are resting until they revive in the glory of God! Four palm trees overshadow the three grave mounds; the mother rests in the middle, to both sides our children."